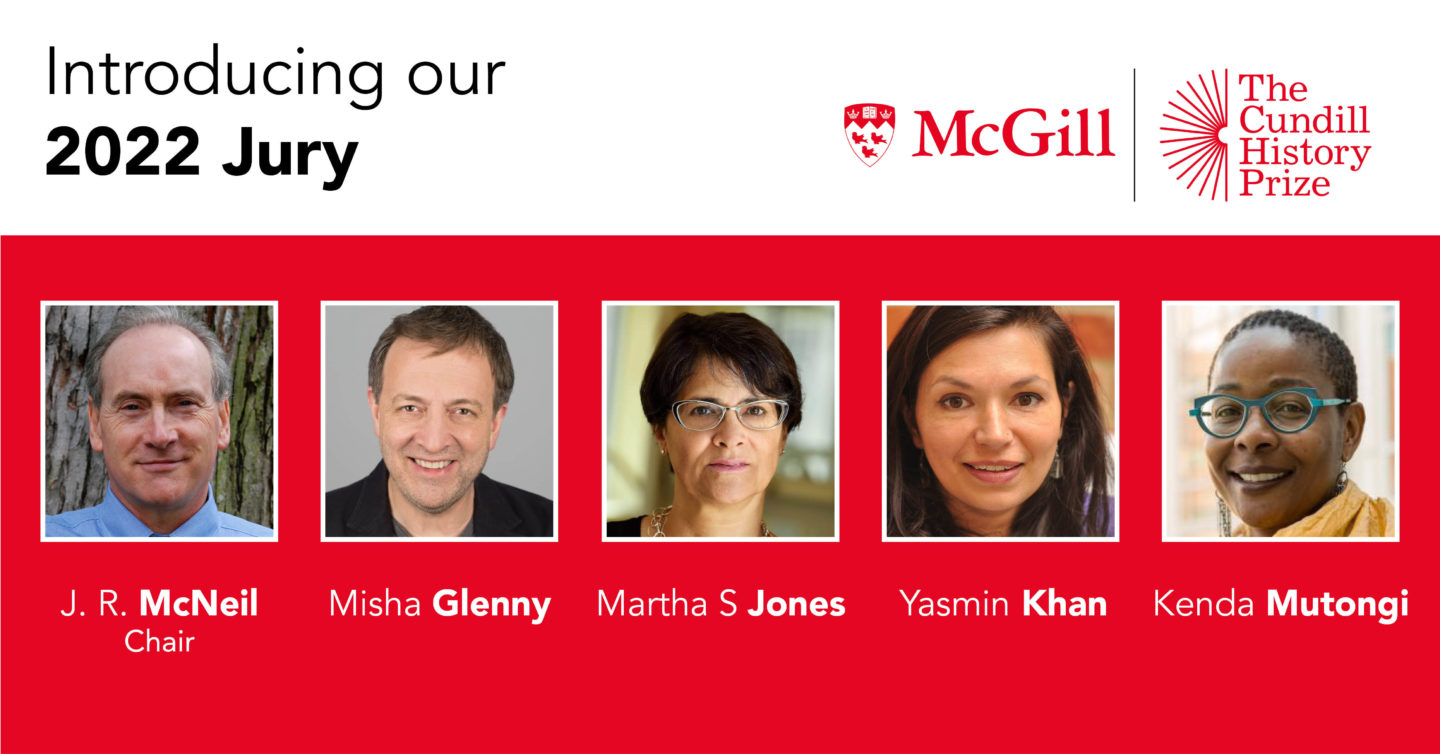 • Former BBC Central Europe Correspondent Misha Glenny is a bestselling author and Rector of the Institute for Human Sciences in Vienna. He has also taught as a visting professor and is a regular contributor for the media, including the New York Times.

• Martha S. Jones is a legal and cultural historian whose work examines how Black Americans have shaped American democracy. She is Professor of History at The Johns Hopkins University and was a 2021 Cundill History Prize shortlistee. She is a public historian with a particular interest in writing for broader audiences.

• Yasmin Khan is a writer and Associate Professor of British History at the University of Oxford. Her historical fiction and non fiction writing have earned her a Gladstone Prize and the Karachi Literature Festival Prize, and she has written for media outlets including the Guardian and the BBC History Magazine.

• Kenda Mutongi, Professor of African, world and gender history at MIT, is an expert in post-colonial Africa, who has also been a member of the Intitute for Advance Study at Princeton and a fellow of the Radcliffe Instutite at Harvard. She writes extensively on African cultural studies, as well as serving on several editorial boards.

Following the reading period over the summer months, the jurors will meet in a series of video conference calls to deliberate on the longlist, the shortlist of eight, the three finalists and, ultimately, the one winner of the US$75,000 prize, administered by McGill University.

Misha Glenny said: “As a writer and voracious consumer of history books, I’m always interested to observe the new trends in history writing whether micro-histories or big picture narratives. Being on the jury will doubtless introduce me to first-class work that I might otherwise have missed and I’ll be looking out for that killer combination of great story telling and meticulous, well-sourced research.”

Kenda Mutongi said: “The Cundill History Prize shines the spotlight on deeply-researched histories that are literary and appeal to a broad public, exactly where the field of history should be going in this era of information wars. I am looking forward to reading the nominations alongside other historians. While giving out the prize is our ultimate goal, I am excited about the process of reading new work, arguing about it with the jury members, and learning about a range of historical perspectives.”

Martha S. Jones said: “In 2022, history matters perhaps more than ever. Whether we are looking back to discover the origins of our contemporary world or looking ahead to anticipate its future, understanding the past is indispensable. The Cundill History Prize provides one road map for this urgent sort of inquiry, pointing us to works that both honor excellence in research and evidence how the best ideas can be crafted for readers of the many rather than of the few. It is a distinct honor to be part of a deliberation that looks to understand how we got here in a human sense that sets aside boundaries of geography and of politics. This humanistic approach to history makes the Cundill History Prize both distinct and vital.”

Yasmin Khan said: “I am looking forward to reading books which are original, tell new and unexpected stories and which draw on archives and the historical record from around the world. This might be micro history or history written on a grand scale, but I am drawn to the lives of people whose voices haven’t always been heard. At a time when media and politics seems to simplify and polarize, good history complicates and challenges received wisdom and standard narratives. This makes the Cundill History Prize vitally important, and I am very pleased to be a member of the 2022 Jury.”

The Cundill History Prize is open to authors from anywhere in the world – regardless of nationality or place of residence – as well as translations into English.

Upon being appointed Chair, J.R. McNeill said: “In 2022, public events remind us once more that history is always with us shaping our world and our lives. The need for works of history that combine the highest scholarly standards with appealing prose is as urgent as ever. The Cundill History Prize shines a spotlight on exactly that sort of book. I look forward to working with fellow jurors on our task.”

US$75,000 are awarded to the winner, making the Cundill History Prize the biggest purse for a work of non-fiction in English, with US$10,000 awarded to each of the two runners-up.

Following last year’s fully digital programme, delivered to an ever-growing, worldwide audience through a network of partners including CBC Ideas, Literary Hub, History Hit, History Extra and Literary Review of Canada, the prize forges ahead in 2022 with an exciting line-up of events in store.

The shortlist will be announced in September, followed by the finalists announcement in October. The winner will be named in early December 2022 as part of the third annual Cundill History Prize Festival — set to also include the Cundill Lecture and Cundill Forum, alongside new features. The full season calendar will be unveiled later this year.

Last year, the jury chaired by Michael Ignatiff awarded professor at the University of Maryland, Baltimore County, Marjoleine Kars for Blood on the River: a Chronicle of Mutiny and Freedom on the Wild Coast (The New Press), the untold story of a slave rebellion unearthed from a unique Dutch archive. The other two finalists were the UK-based Canadian historian Rebecca Clifford, Professor of Transnational and European History at the University of Durham (Survivors: Children’s Lives after the Holocaust, Yale University Press), and the French historian Marie Favereau, Associate Professor of History at Paris Nanterre University (The Horde: How the Mongols Changed the World, Belknap Press of Harvard).