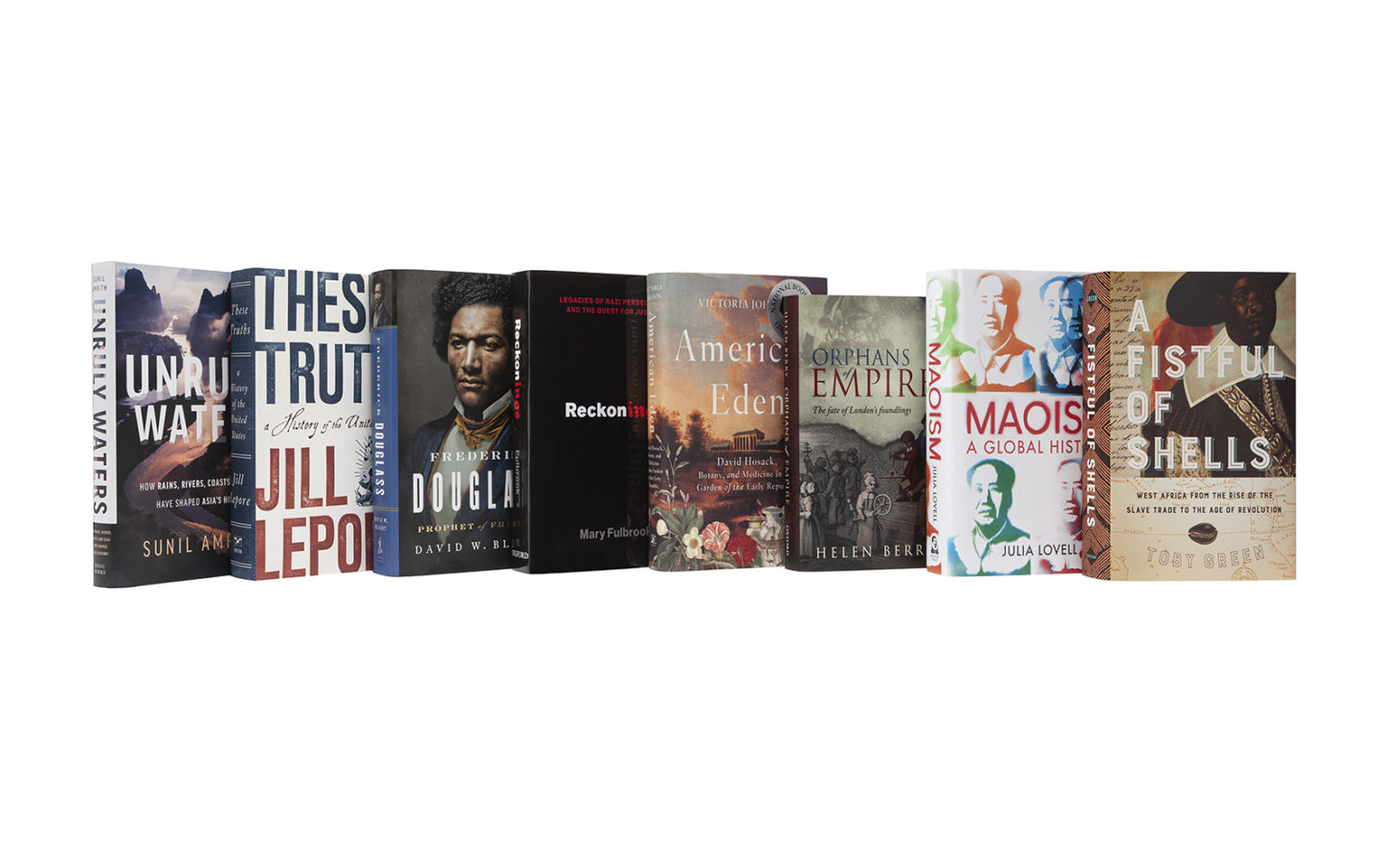 The exclusive event, organised by prize administrators McGill University and hosted by the Consulate General of Canada, was attended by guest of honour Maya Jasanoff (The Dawn Watch), last year’s winner of the US$75,000 prize, and an esteemed audience of historians, publishers, agents, journalists and writers.

Orphans of Empire: The Fate of London’s Foundlings
Oxford University Press (UK, US)

Reckonings: Legacies of Nazi Persecution and the Quest for Justice
Oxford University Press (UK, US)

A Fistful of Shells: West Africa from the Rise of the Slave Trade to the Age of Revolution
The University of Chicago Press (US), Allen Lane (UK)

American Eden: David Hosack, Botany, and Medicine in the Garden of the Early Republic
Liveright Publishing (US)

These Truths: A History of the United States
W. W. Norton & Company (US)

Maoism: A Global History
The Bodley Head (UK), Knopf (US) 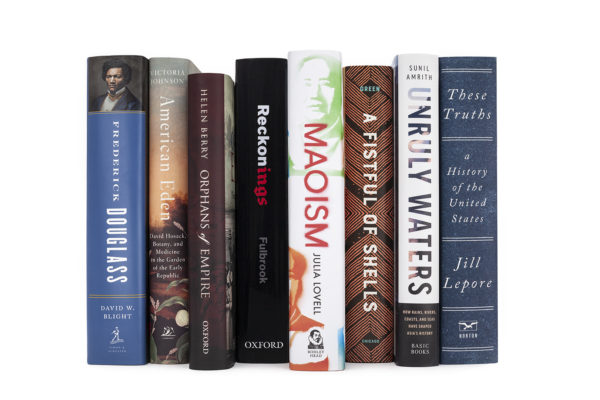 Announcing the shortlist for the leading international prize for history writing, Alan Taylor said: “The authors shortlisted for the 2019 Cundill History Prize seek to illuminate contemporary dilemmas with a deeper sense of development through time. These dilemmas include global climate risks, family dynamics in Britain, justice and injustice is post-Holocaust Europe, and the lingering legacy of slavery in the United States.

The books include sweeping synthetic works, such as Jill Lepore’s These Truths, and close examinations of intimate worlds, as with Helen Berry’s Orphans of Empire. They range in time and place from early modern West Africa to the global spread of Maoism in the twentieth and twenty-first centuries, and combine a depth of research with innovative questions and clear prose meant to communicate, often beautifully, to general readers as well as academic scholars.”

The shortlist tackles issues from climate change in Asia to the legacies of Nazi persecution in Europe, from Maoism as an international force to a history of the United States that takes us to the election of Donald Trump. It was presented by Taylor alongside the award-winning Harvard Professor Jane Kamensky, Director of the Oxford’s China Centre Rana Mitter, the German-born University College Dublin Professor Robert Gerwarth, and the best-selling Canadian writer and historian Charlotte Gray. This was followed by an in-conversation between Maya Jasanoff and the award-winning historian and bestselling writer Amanda Foreman, moderated by Antonia Maioni, Dean of the Faculty of Arts at McGill University.

Antonia Maioni said: “Stimulating, exciting, challenging – this shortlist reflects the very best history writing produced anywhere in the world. We are absolutely delighted to reveal it here, in New York, in the third year after the major relaunch of the prize in 2017. Our stellar 2019 jury has spent the summer reading an enormous wealth of works submitted to the prize from all corners of the world. I don’t envy them the task of picking the three finalists and winner from this exceptional list.”

The historians on the shortlist – five women and three men – have more than 15 prestigious literary prizes between them, including the Pulitzer Prize and the Wolfson History Prize, and geographical research interests encompassing Africa, America, Asia, Britain, China, and Germany. Accounting for editions published across all territories, the list represents eight trade and three academic publishers. Allen Lane (UK) and Oxford University Press (UK, US) both feature with two titles each.

Media images of the shortlist announcement in New York, and shortlist book photography are available for download here. 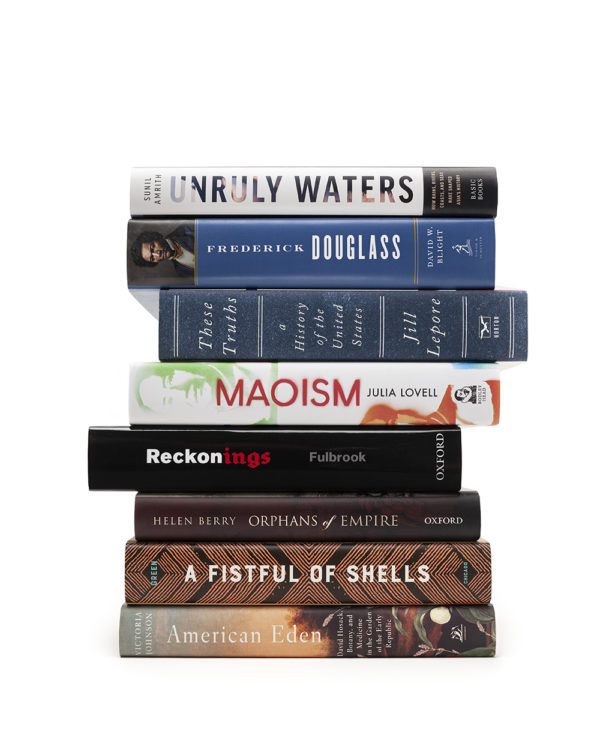 The British historian Helen Berry investigates what happened to the children who were raised at the London Foundling Hospital, Britain’s first home for children at risk of abandonment, in Orphans of Empire: The Fate of London’s Foundlings. | Oxford University Press (UK)

With Frederick Douglass: Prophet of Freedom, the Pulitzer Prize winner David Blight delivers the definitive biography of the most important African American of the 19th century: Frederick Douglass, the escaped slave who became the greatest orator of his day and one of the leading abolitionists. | Simon & Schuster (US, UK)

The Professor of German History at UCL Mary Fulbrook explores the lives of both the victims and the perpetrators of the Holocaust in Reckonings: Legacies of Nazi Persecution and the Quest of Justice, winner of this year’s Wolfson History Prize. | Oxford University Press (UK, US)

For A Fistful of Shells: West Africa from the Rise of the Slave Trade to the Age of Revolution, Toby Green collects the histories of West and West-Central Africa in an effort to show the complex kingdoms of art and finance that existed before colonial influence. | The University of Chicago Press (US), Allen Lane (UK)

A finalist for the 2019 Pulitzer Prize in History, American Eden: David Hosack, Botany, and Medicine in the Garden of the Early Republic by New York-based historian Victoria Johnson, tells the untold story of one doctor’s visionary quest to build America’s first botanical garden in Manhattan. | Liveright Publishing (US)

With These Truths: A History of the United States, Harvard historian and New Yorker staff writer Jill Lepore delivers an ambitious one-volume history of the US which places truth itself – a devotion to facts, proof, and evidence – at the centre of the nation’s history. | W. W. Norton & Company (US)

From the tea plantations of north India to the sierras of the Andes, from Paris’s fifth arrondissement to the fields of Tanzania, Julia Lovell, Professor of Modern China at Birkbeck College, University of London, re-evaluates Maoism as both a Chinese and an international force, in Maoism: A Global History. | The Bodley Head (UK), Knopf (US)

Juror Charlotte Gray said: “Selecting a handful of books for the shortlist from the many excellent titles submitted was a challenge, as we balanced vibrancy of prose against depth of research, global perspectives against hidden lives. But two themes stood out for me in our selections. The first is the originality of the approaches each author took, and their collective eagerness to widen our lens on the past. The second is the contemporary resonance of the stories told and the analyses presented — proving, once again, that today has been irrevocably shaped by yesterday.”

Juror Robert Gerwarth said: “At a time when historical amnesia appears to be on the rise in public debates around the world, it is more crucial than ever to celebrate, as the Cundill History Prize has done since its foundation, the continuing importance of history for our present and future. Collectively, the terrific books on this shortlist stand out as prime examples of excellent history writing that combine literary flair with serious scholarship.”

Juror Jane Kamensky said: “History is a capacious and eclectic discipline, and this list of eight titles showcases its range and potential impact. The superb, original works here span five continents and as many centuries. They work on wildly different scales, from the individual and the household to the nation, the continent, the planet. They document the world-shaping impacts of actors well-known and unknown – and in one case, non-human. With relentless digging, great creativity, and in graceful, incisive prose, these works demonstrate, in their various ways, the reasons why knowledge of the past is essential to a robust and humane present.”

Juror Rana Mitter said: “Something that distinguishes this list is its embrace of the global. It grapples with empires, both at the wide scale (a history of the United States) and the micro-level (the fate of the orphans who lived in the times of empire). It also recovers lost voices, showing that Africa and Asia, places too often seen through the eyes of the west, have their own voices which tell different and powerful stories. Something that distinguishes these works is their dedication to style; each one offers a powerful read that combines elegant style with big ideas.”

Awarding US$75,000 to the winner and US$10,000 to the two runners up, the Cundill History Prize is the largest purse for a book of non-fiction in English. It is open to books from anywhere in the world, regardless of the author’s nationality, as well as works translated into English. The prize is now partnering with HistoryExtra, the official online home for BBC History Magazine, BBC History Revealed and BBC World Histories Magazine, and continues to build its network of partners around the world to further produce the best history writing into the mainstream.

On winning the prize last year, Maya Jasanoff, said: “Winning the Cundill History Prize brought my work to new audiences, and gave me tremendous encouragement to keep trying to bring out the story within history. It’s fantastic to see a prize that rewards rigorous historical scholarship as much as it does powerful writing.”

About McGill University
Founded in Montreal, Quebec, in 1821, McGill is a leading Canadian post-secondary institution. It has two campuses, 11 faculties, 13 professional schools, 300 programs of study and over 40,000 students, including more than 10,400 graduate students. McGill attracts students from over 150 countries around the world, its 12,500 international students making up 30% per cent of the student body. Over half of McGill students claim a first language other than English, including approximately 20% of our students who say French is their mother tongue. www.mcgill.ca

About HistoryExtra
Historyextra.com is the online home of three leading popular history magazines: BBC History Magazine, BBC History Revealed, and BBC World Histories. It is the place to go for accessible and authoritative historical content across all topics and periods. www.historyextra.com

About F. Peter Cundill
F. Peter Cundill (1938-2011), a distinguished alumnus of McGill University, was a philanthropist, sportsman, diarist, and renowned global investor. A voracious reader and inveterate traveller, F. Peter Cundill had an abiding passion for history: he believed that it was possible to comprehend the present and arrive at a measured perspective about the future only by first understanding the past. This led him to found the Cundill History Prize. The Peter Cundill Foundation continues to support charities, research projects, and educational and enterprise gifts to young people. www.thepetercundillfoundation....