Cundill History Prize announces 2019 jury at The London Book Fair, seeks even more submissions from all parts of the world

The twice Pulitzer Prize-winning historian Alan Taylor will chair the jury for the 2019 Cundill History Prize, Antonia Maioni, Dean of Arts at McGill University, will announce at the London Book Fair today.

The Cundill History Prize is at The London Book Fair to seek submissions from underrepresented parts of the world in particular, and across a breadth of global topics. The prize is open to authors from anywhere in the world – regardless of nationality or place of residence – and to translations into English. Antonia Maioni, Dean of Arts at McGill University, is at the English PEN Literary Salon today, discussing with 2018 juror Peter Frankopan how to attract history in English that goes beyond traditional Western topics and geographies.

Antonia Maioni said: “I am delighted to announce such an outstanding panel of jurors for the 2019 Cundill History Prize. With research interests ranging from early America to modern China, from twentieth-century Europe to contemporary Canada, investigating issues from political violence, war and slavery to family, culture, and everyday life, these distinguished international historians will be judging some of the best history writing from around the world. It’s so exciting to be making this announcement at the The London Book Fair this year, where we are present to bring this important prize to the attention of an even wider global publishing community.”

Alan Taylor, Chair of the Jury, said: “I am delighted to work with such an insightful and accomplished jury to evaluate the best-written works in history for the premier international prize in our field.  The Cundill Prize helps to advance literary quality as well as research originality in history writing.” 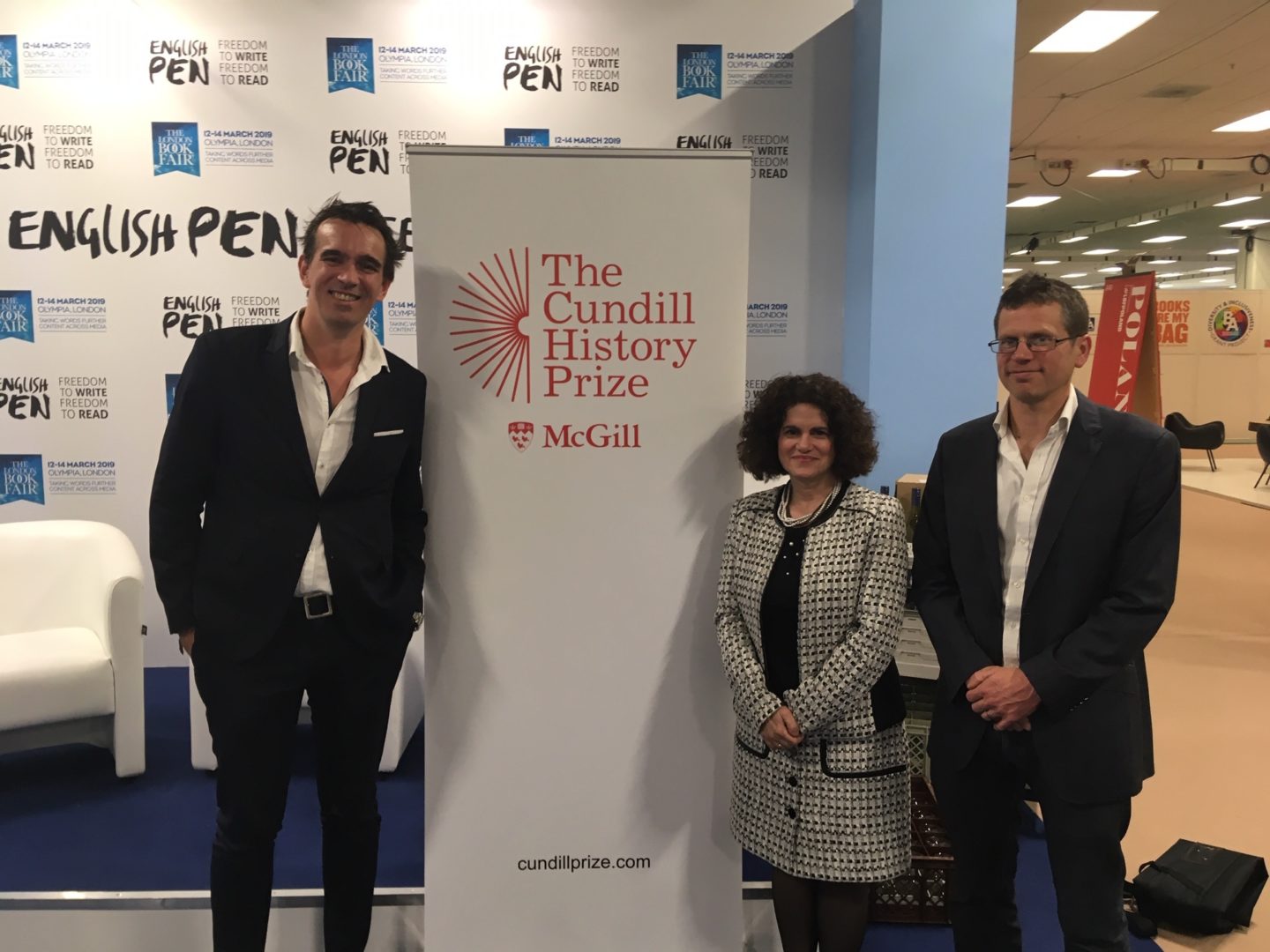 Administered by Canada’s McGill University, the Cundill History Prize rewards the best work of history in English. With US$75,000 going to the winner, and $10,000 to each of the two runners up, it is the richest purse for non-fiction in English.

Charlotte Gray said: “It is a great honour to serve on this distinguished jury for the most significant award in the field of history. I look forward to thinking about the interplay between excellent history and compelling writing as we assess the work of some of the world’s most skilled historians. In a period of disruption and uncertainty, good history is important for so many reasons, including its potential to be enlightening, provocative, enriching and salutary. New tools of analysis, and new areas of research, are widening our perspective of who matters and why, and a prize like the Cundill spotlights excellent books that deserve a wide readership.”

Robert Gerwarth said: “I’m delighted to serve on the jury for the 2019 Cundill History Prize. At a time of ‘post-truths’ and contested pasts, it seems more important than ever to celebrate outstanding works of history writing.”

Jane Kamensky said: “I so look forward to reading the Cundill Prize submissions. During its eleven-year run, this prize has done a terrific job bringing fresh scholarship and sharp writing to international attention. The best history writing moves us as much as it teaches us. It shows us who we are and how we got here. Never have we needed those lessons more.”

Rana Mitter said: “I was honoured to be a judge for the 2017 Cundill History Prize, and am delighted to return this year. I was truly impressed by the global and chronological reach of the books I read  in my previous stint as a judge, which was a little like undertaking the world’s most intense history tutorial, particularly when we are living through times that future historians will no doubt think truly historic. I am hugely looking forward to reading and learning from another selection of some of the most exciting works in history being written today.”

International publishers have until April 1 to submit their best works of history for the 2019 prize. The shortlist will be announced in September, followed by the three finalists in October. The Cundill History Prize Gala and winner announcement will take place in Montreal in November.

Last year, the jury chaired by Mark Gilbert awarded the Harvard historian Maya Jasanoff for The Dawn Watch: Joseph Conrad in a Global World, her genre-bending account of the life and world of Polish-British writer. The two runners up were the Pulitzer Prize-winning historian Caroline Fraser for the first comprehensive  historical account of the life of Laura Ingalls Wilder (Prairie Fires); and the Ohio State University Associate Professor of History Sam White for his inter-disciplinary investigation into the decisive role the climate played in the success and failure of the first North American settlements (A Cold Welcome).

Alan Taylor (Chair) holds the Thomas Jefferson Foundation Chair in American History at the University of Virginia.  He is the author of eight books including two that won the Pulitzer Prize: William Cooper’s Town: Power and Persuasion on the Frontier of the Early American Republic (1995) and The Internal Enemy: Slavery and War in Virginia, 1772-1832 (2013).  He also served as the Harmsworth Professors at the University of Oxford in 2016-2017.

Charlotte Gray is one of Canada’s best-known writers, and author of ten acclaimed books of history and literary non-fiction. Born in Sheffield, England, and a graduate of Oxford University and the London School of Economics, Charlotte began her writing career in England as a magazine editor and newspaper columnist. After moving to Canada in 1979, she worked as a political commentator, book reviewer and magazine columnist before she turned to biography and popular history. Charlotte’s most recent award-winning book is The Promise of Canada: People and Ideas That Have Shaped Our Country. Charlotte appears regularly on radio and television as a political and cultural commentator. In 2004 she was the advocate for Sir John A. Macdonald, Canada’s first prime minister, for the CBC series: The Greatest Canadian. Charlotte is the 2003 Recipient of the Pierre Berton Award for distinguished achievement in popularizing Canadian history, and is the former chair of the board of Canada’s National History Society. The recipient of five honorary doctorates, she is Adjunct Research Professor in the Department of History at Carleton University, a member of the Order of Canada and a Fellow of the Royal Society of Canada.

Robert Gerwarth is Professor of Modern History at University College Dublin and Director of the UCD Centre for War Studies. After studying history and political science in Berlin, he completed his DPhil at Oxford University. Gerwarth has also held research fellowships or visiting professorships at Harvard University, the Institute for Advanced Study in Princeton, and Sciences Po Paris. In 2013-14 he was an Alexander von Humboldt Senior Research Fellow in Marburg and a Fernand Braudel Fellow at the European University Institute. For his work on political violence in the twentieth century, he has received major research grants from the European Research Council (ERC), the Guggenheim Foundation, the Irish Research Council (IRC), and the Gerda-Henkel Foundation. Gerwarth is the author of award-winning monograph The Bismarck Myth (2005) and a critically acclaimed biography of Reinhard Heydrich (2011). His third monograph, The Vanquished: Why the First World War Failed to End was published in 2016 and won several prizes. His work has been translated into some thirty languages.

Jane Kamensky is Jonathan Trumbull Professor of American History at Harvard University and the Pforzheimer Foundation Director of the Arthur and Elizabeth Schlesinger Library on the History of Women in America at the Radcliffe Institute for Advanced Study. Her most recent book, A Revolution in Color: The World of John Singleton Copley (2016), won the New-York Historical Society’s Barbara and David Zalaznick Book Prize in American History, the Massachusetts Book Prize in Nonfiction, the James Bradford Biography Prize of the Society for Historians of the Early American Republic, and the Annibel Jenkins Biography Prize of the American Society for Eighteenth-Century Studies; and was a finalist for several other national prizes. Her previous books include The Exchange Artist: A Tale of High-Flying Speculation and America’s First Banking Collapse (2008); and the novel Blindspot (2008), jointly written with Jill Lepore. With Edward G. Gray, she is coeditor of the Oxford Handbook of the American Revolution (2013). She is currently working on a history of the sexual revolution as revealed by the biography of feminist sex radical Candida Royalle. Candida Royalle and the Sexual Revolution: A History from Below, will be published by W.W. Norton.

Rana Mitter is the Director of the University China Centre and Professor of the History and Politics of Modern China at the University of Oxford. He is the author of several books, the most recent of which is Forgotten Ally: China’s World War II, 1937-1945 (Houghton Mifflin Harcourt, 2013: UK title, China’s War with Japan), which won the 2014 RUSI/Duke of Westminster’s Medal for Military Literature and was named a CHOICE Outstanding Academic Title and a Book of the Year in the Financial Times and Economist. He was elected a Fellow of the British Academy in 2015. He has commented regularly on China in media and forums around the world including the World Economic Forum at Davos. He holds a Leverhulme Major Research Fellowship for 2019-22, during which time he will write a book on the making of the postwar Asian order.  He is a regular presenter of BBC Radio 3’s Free Thinking programme, downloadable as the BBC Arts and Ideas Podcast.

Founded in Montreal, Quebec, in 1821, McGill is a leading Canadian post-secondary institution. It has two campuses, 10 faculties, 12 professional schools, 300 programs of study and almost 41,000 students, including more than 9,700 graduate students. McGill attracts students from over 150 countries around the world, its 12,000 international students making up 30% per cent of the student body. Over half of McGill students claim a first language other than English, including approximately 20% of our students who say French is their mother tongue.
www.mcgill.ca

F. Peter Cundill (1938-2011), a distinguished alumnus of McGill University, was a philanthropist, sportsman, diarist, and renowned global investor. A voracious reader and inveterate traveller, F. Peter Cundill had an abiding passion for history: he believed that it was possible to comprehend the present and arrive at a measured perspective about the future only by first understanding the past. This led him to found the Cundill History Prize. The Peter Cundill Foundation continues to support charities, research projects, and educational and enterprise gifts to young people.
www.thepetercundillfoundation.com