Confrontational accounts of Black working-class activism, a momentous 18th-century slave uprising, and the expulsion of Native Americans in the 1930s; the Israel-Palestine conflict from a Palestinian perspective; two distinct narratives on India; the Aztecs through their own words — the books on the shortlist for the 2020 Cundill History Prize shine a light on imperialism, colonialism, oppression and conflict, often by giving voice to those seen as merely subject to it.

The list of 10 — which ranges from Greece to Palestine, from Britain to Mexico, from the United States to the Middle East — was announced by Peter Frankopan, Chair of the Jury, together with jurors Anne Applebaum, Lyse Doucet, Eliga Gould and Sujit Sivasundaram in a virtual event, broadcast in partnership with Literary Hub, today, Tuesday, September 22.

Working with partners in Canada, the US and the UK, the world’s leading history prize, administered by McGill University, is rolling out a fully digital event programme between now and late November, when the winner will be announced. For today’s event, the jurors were joined by past winners Julia Lovell (2019, Maoism), Maya Jasanoff (2018, The Dawn Watch) and Daniel Beer (2017, The House of the Dead), for a conversation that viewed the current historical moment through a critical lens, drawing on the history of global paradigm shifts, China’s handling of the Covid-19 outbreak, and the pandemic’s impact on the teaching of history. The event will be made available on cundillprize.com as well as lithub.com.

Announcing the list, Peter Frankopan said: “2020 has been a year of profound change — in so many ways, not just the pandemic — and studying and reading about the past helps us remember the people, the places, the times, for good and for bad, when history has changed, in individual countries, in regions, in continents, and globally. There is a real resonance in the books that we have chosen.”

Making their decision, the jurors decided to let books on similar themes or regions stand next to each other — shortlisting two titles on India and two different accounts of the Middle East — consciously making room for different historical approaches and sensitivities. To facilitate this approach, and spotlight history that matters in an extraordinary year, the jury decided to nominate 10 instead of the customary 8 titles for their shortlist. 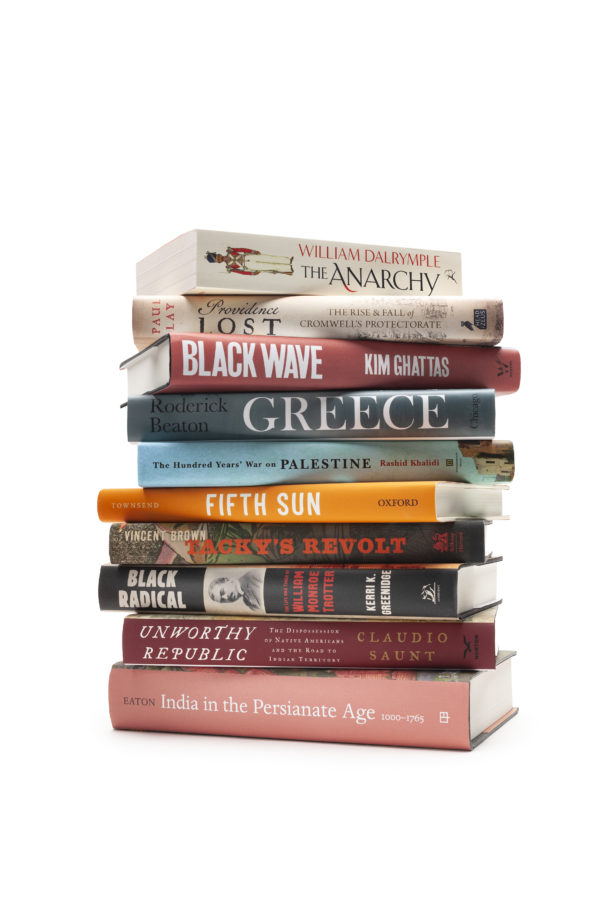 Greece: Biography of a Modern Nation

The University of Chicago Press | Penguin

Tacky’s Revolt: the Story of an Atlantic Slave War

The Anarchy: the Relentless Rise of the East India Company

Black Wave: Saudi Arabia, Iran and the Rivalry that Unravelled the Middle East

Black Radical: the Life and Times of William Monroe Trotter

The Hundred Years’ War on Palestine: a History of Settler Colonialism and Resistance, 1917-2017

Providence Lost: the Rise and Fall of Cromwell’s Protectorate

Unworthy Republic: the Dispossession of Native Americans and the Road to Indian Territory

Fifth Sun: A New History of the Aztecs

READ MORE about the shortlisted titles and authors

Frankopan said: “This is a wonderful list of books. Richly varied, exciting, illuminating. Individually, these ten books are outstanding, and as a group they make for a fantastic collection. There are some classics in there; there is no doubt about that. Each book shows just how alive and vibrant and flourishing first-class scholarship and non-fiction writing are in the world today: for all the frustrations and disappointments we have in the world, history is alive and well. It’s important that good ground-breaking new history writing explains what is important and why it matters. And each of the ten books we have chosen for this shortlist does that — in many different ways.”

Antonia Maioni, Dean of the Faculty of Arts at McGill University, said: “The 10 books the jurors have presented to you today are outstanding examples of what the Cundill History Prize celebrates: works of real relevance — and consequence — that are so finely crafted they are also fantastic reads. I hope that many of you will seek out and discover these exceptional books.”

Awarding US$75,000 to the winner and US$10,000 to the two runners up, the Cundill History Prize is the largest purse for a book of non-fiction in English. It is open to books from anywhere in the world, regardless of the author’s nationality, as well as works translated into English.

Individual and group book photography as well as author headshots for all shortlisted titles are available for download here.